Meg was dreaming. She must be.

The room was cast in shadows of purples and silver.

And although she was standing beside the bed, she could also see herself laying on the bed covers kicked away behind her. She could almost feel her pillow under hear head, and she could make out the sound of Adrien tuning his violin… it must be early morning then… She was strangely and acutely aware of being asleep and yet awake at the same time.

And then, as in the way of dreams, she was suddenly no longer alone. In front of her now stood two figures.
“You decieve yourself so, tahnut…” 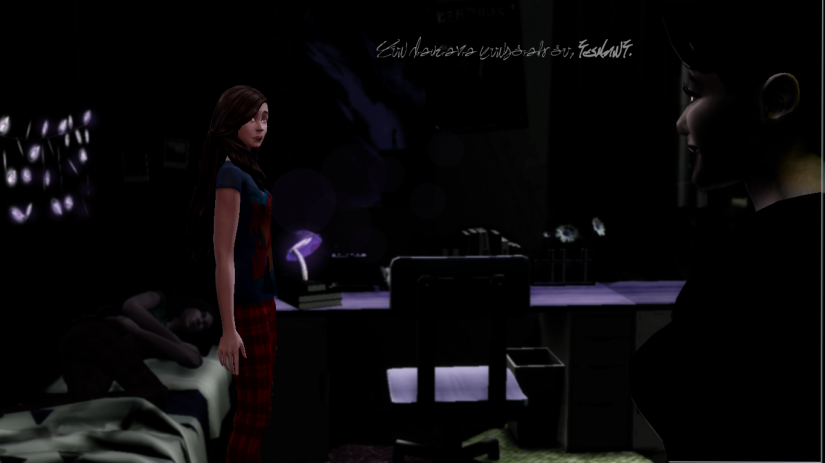 Her hair stood on end as the voice reached her. She couldn’t make out their faces so shrouded in the dreams darkness were they but the figure who spoke had eyes as bright and white as the full moon. The glowed eerily watching Meg intently. The words themselves seemed to echo through the darkness in a language that was familiar and strange. She understood what most of the words meant but pieces remained mysterious. With the words themselves she could almost see their color in the air, silver snaking around her for a moment before they faded away. Although the voice was rich and sultry there was an underlying sense of danger she could not ignore. Whoever the voice belong to…they were not to be trifled with and whoever the voice belong to… she did not know them.

Dream Meg took a deep breath, determined not to show the fear she felt in every inch of her body.
“Sewa, don’t fool yourself for too long…”

The second entity talked and th voice flowed over her and through her. It was older, tinged in the way of a voice of someone aged. Wine…the tone appeared like burgandy wine wrapping itself around her torso and snaking up towards her cheek. With the first, unfamiliar word the swirl of color brushed her cheek regretfully… wistfully… fading as the words did.

She wanted to hear that voice again. It called to something deep inside her that she could not even begin to identify. She struggled harder to make out that figure’s face. But the features would not clear for her.

Adrien’s violin tuning became the first strains of a song and under it she could hear the voices converse. Now the words were muffled and colors gone. Leaving her in a dark and fuzzy swarm of music and voices. The voices, whoever or whatever they were meant to represent, they were talking about her. Discussing her, evaulating her… and somehow finding her lacking. Between the strains the violin and the voices judgement she felt frustration building within her.

She wanted to shout at the voices, to make them show themselves. She wanted to yell at Adrien to make him stop ignoring her. To make this endless, silent treatment end. Breathing deep, she opened her mouth and the voices stopped. Silent, attentive. Adrien’s violin continued on…but no words would come from her mouth.

She put a hand to her throat.

In the darkness, the silver voice was giddy. “…not strong enough to speak your mind…”
“…it will change, sewa….if you just would…” the wine voice encouraged.

And then the voices melded, their sentiment melding as one. “Open your eyes!“ 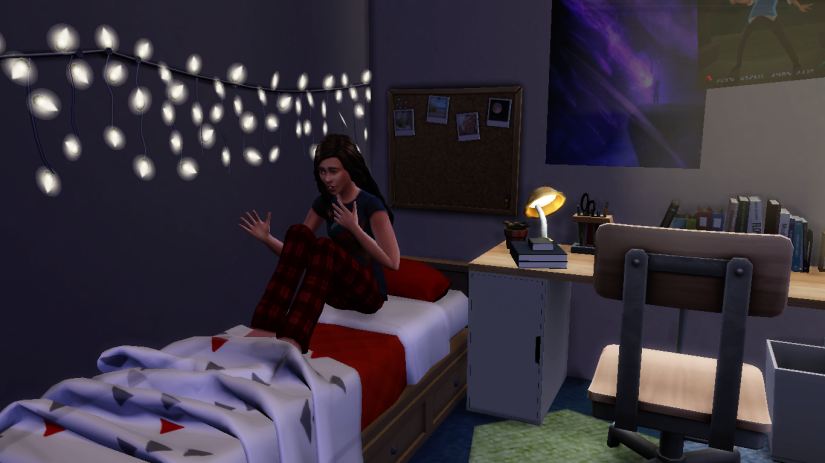 Meg sat up in bed, feeling as if she was surfacing from under water. Her head was suddenly pounding. The voices were gone, but Adrien’s song persisted as she knew it would.

Setting her feat on the ground she dropped her pounding head into her hands massaging her temples. She had never had a dream like that before. The voices still lingered in her mind. The first voice’s jeering taunt, in particular, made her glare at the wall where strains of Adrien’s piece filtered through to her. 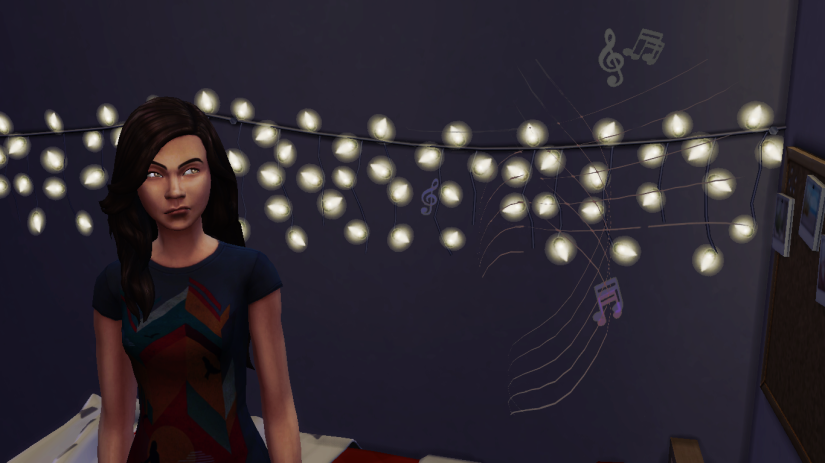 The words still echoing she stood up and decided she should at least do something about that. Not strong enough to speak her mind, huh?

Detemined she walked with purpose to Adrien’s door. Driven by irritation she didn’t even think as she banged on his door. The violin cut short and the door opened. Adrien stood before her wearing nothing but a pair of sweat pants his hair still somewhat tossled from sleep.

Suddenly all the words she had escaped her and she could only stare at him.

“Yes?” Crossing his arms across his chest, he left the door opened leaned against the frame. There was something smug about his look as if he knew exactly why her face had gone blank. “Something I can help you with, Miss Blackwell?”

She struggled for a moment not to stare at his chest, or his abs. He had abs like she had never seen before. Focus, Megara. You came here to speak your mind. As the words had momentarily left her she cleared her throat instead. It had suddenly gone dry. “First… don’t you think you should put a shirt on?”

Adrien’s only reply was to lift an eyebrow higher.

“I–That is…” she stuttered for a moment. Adrien remained in the doorway, chest bared and arms crossed impatiently waiting. But she could swear there was a tight, smug smile on those strong, full lips of his. Gah, why was she even thinking about his lips!?

Mentally she reeled in her brain. Just. Say. What. You. Came. To. Say.

To steel herself she she folded her hands together in front of her and focused on his eyes. “Look, I made an idiot out of myself our first day.” the words came out in a rush almost tripping over themselves.

Adrien nodded. “Ok.” the smugness in his expression never wavered.

“Nobody is denying that… But…like it or not we will be living together for at least the next year and I refuse to be walking on eggshells. I would at the very least like you to pretend you’re living with someone else and not just ignore me all the time. I mean do you really have to play violin first thing in the morning?”

Adrien blinked his smug espression melting into innonce. “I’m a composition major. I need to play my compositions as I write them. I happen to find it easiest to write in the morning…”

Meg frowned and gestured with her arm to his room. “And in the evening?”

“I practice my concert pieces…”

Meg could only stare. “OK, well, the walls are thin. Can we at least agree to hold off on composing until…at least 9 am? I’m not usually coherent until I’ve had a cup of tea.”

Adrien looked at her thoughtfully and then he grinned, a mischievous edge to it that both quickened her heart rate and out her on guard. “Fine, no violin before 9. Is that all Miss Blackwell?”

She blinked a bit surprised at his response and then nodded. “Yes. Thank you.”

“You’re welcome…” he said cordially and closed the door the suite filled with silence for a moment.

A bit dumbfounded she stared at the door and then smiled feeling very vindicated. So now who can’t speak her mind, huh, voices??

As soon as the thoughts crossed her mind she shook her head at herself. Now she was arguing with voices from a dream that were most likely not real? Classes were beginning tomorrow… part of her was wondering if she was really prepared for this. Still, satisfied that Adrien had silenced his violin and since she was already awake, she turned back to her room.

Sliding open her closet door, she decided she would reward herself by seeing if the campus had a decent teahouse. As today was the last day before classes officially began she figured she better enjoy her last day of wandering. Looking through her clothes she found herself humming. Things are looking —

A sudden flurry of notes startled her and she jerked around as piano music filled her room. “You have got to be kidding me….he plays piano too?” The sudden mischievous curl to his lips plays back into her mind and lifting her hands to the ceiling she growled. “…no violin before 9…” she muttered to herself.. “Hilarious…”

Irritated, Meg dressed quickly, not even looking at the clothes she picked, so great was her urge to leave. Grabbing a textbook off the top of her dresser she stuffed it into her bag and stormed out of the suite making sure to slam the exterior door especially loud. 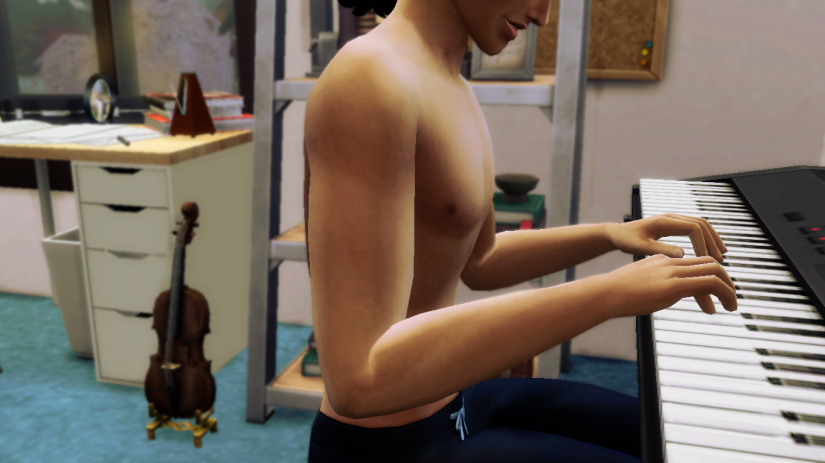 Adrien heard the door slam and he let his fingers relax on the piano keys. He had to laugh to himself. His new suitemate was extremely easy to rile up. He enjoyed the way her eyebrows drew together and her pert little nose flared when she spoke emphatically.

Then he sobered…But for his own peace of mind he probably should have just agreed. It wasn’t like she was really being unreasonable. Had he really been so out of touch with living with another person?

“What am I doing?” He murmured to himself his eyes wandering across the room to the small framed picture on his desk.

It was the only thing in the room that had any sentimental value to him. It was the only picture he had left of her. It was one of those pictures that she had talked him into. The kind were they made exaggerated expressions. “Because you never smile!” she had yelled.

He smiled then. Because that was the kind of person she was. She made you smile… even when you didn’t feel like it. She would have known how to handle a suitemate. Heck, she’d probably already be best friends with Meg. And dragging his butt out of the room to experience the life, the campus, the people…

Feeling suddenly drained, Adrien laid down on the floor and laid his feet on the piano bench with a sigh. “I hope you know that I’m doing the best I can…. I really am.”

Of course, he wasn’t here for the people or the experiences. With his family connections and his past repertoire he could play in any venue in any city in the entirety of Simmica. Heck, across the globe. College was merely a means to fulfill a promise. One he had made many years ago. The degree wasn’t for him. It was for her.

“I made a promise…and I will keep it.” he breathed up to the ceiling with his eyes closed.

No matter how cute Meg–his new suitemate he mentally corrected– might look when she was flustered, there were more important things to attend to.

Nodding to himself as if an important decision had been made he rubbed a hand across his face stood. A chill ran across his skin and he wondered if maybe he should put on a t-shirt then shook his head as the feeling passed. He looked at the piano and then turning leaned down and grabbed his violin.

Looking out the window as he held the violin again his chin he sighed. “Classes do start tomorrow… I can’t just hide in my room forever. Watcher knows that isn’t what you would do…”

Setting it aside for now, he closed his eyes and pulled the bow against the strings, drawing out the first long slow note on the violin.

2 thoughts on “Episode 6: In Shadows”